The Obvious Choice! Since 1970

Besides tuning, all pianos need voicing and tone regulating.  A piano, which is perfectly in tune, often still sounds uneven in brightness.  Some notes sound brighter than their neighbouring notes (unpleasant harsh and tinny notes) and are therefore uneven in mellowness.  Voicing is to some extent done in the factory but not fully completed for a good reason.

Many people incorrectly assume that the tone of the piano is permanently fixed and will remain the same for the rest of its life.  In fact, the tone of any piano will deteriorate over time due to hammer wear, hammer felt compaction, hammers not striking all three strings equally and squarely, strings not being level with each other, and uneven action mechanism regulation, which causes an irregular touch and tone.  When a piano is purchased, voicing and tone regulating is most of the time totally ignored or severely neglected by dealers and owners alike.  This is unfortunate because a piano does sound so much nicer when it is voiced, and you can express your musical emotions so much better.  Once a piano is properly voiced, it needs very little maintenance to preserve that tone.

Due to a lack of knowledge and understanding, some people unfairly criticize the piano manufacturer for the undesirable bright tone the piano produces.  An out-of-tune piano appears to sound brighter, whilst an in-tune piano appears to sound more mellow.  In all fairness, many piano makers play it safe and purposely leave a piano sounding on the bright side, rather than a tone that is too soft, because this gives the piano technician the opportunity to change the “voice” of the piano (the brightness of the tone) to your personal preference.  If the piano manufacturer produced a piano with a too mellow or a too soft tone to your liking, it would be as good as impossible to reverse it to a brighter tone with the original qualities it had before.  Piano makers and piano technicians do hear that each home and concert hall has different acoustical qualities and know that people have different tonal preferences.  For this reason, each piano is ideally fully voiced inside the room or hall it resides in, and not in the piano factory where acoustics are different.  Generally, classical players prefer a mellow rounded tone, while jazz pianists prefer a brighter sounding piano to match the brass instruments and drummer, so as not to be drowned out by other loud and bright sounding instruments. 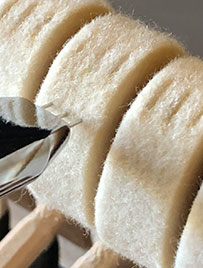 By skillfully pushing needles in different ways into distinct areas of the hammer felt, Guus van den Braak changes the voice (tone) of each hammer to create a well-balanced overtone spectrum from one hammer to the next, and thus a good tonal quality evenly across all keys.  The hammer is not fluffed up or aired up like a pillow as some people think, but the in-built tension in the felt is skillfully and carefully manipulated to get the results desired.

To try and explain what a good sound is, is rather difficult but the aim is to create a “velvet-like” mellow tone that sounds clear, clean and yet not too loud or too weak.  The tone should also have a certain sustain without decaying too soon.  We should also hear the power of a tone with our ears, and feel it with our fingers through the keys and our feet on a timber floor, if you have one.

The true professional best performs this highly skilled work.  Those who are unskilled in voicing will potentially do irreversible and costly damage to the hammers.  Guus van den Braak has tuned, restored, repaired and voiced thousands of pianos during his career of over 50 years.  He has worked on just about every brand and model piano that exists on the planet – from the most expensive Steinway concert grands to the small humble upright in a home.  This has given him a tremendous amount and broad range of knowledge and experience in this field.